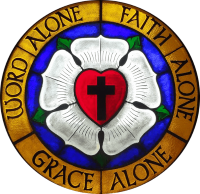 We believe that salvation is a free gift from a gracious God and we can do nothing to earn our salvation. (Ephesians 2:1-10)

We believe the gift of eternal life and salvation is based entirely on God’s grace, through faith in Jesus Christ. (John 14:6 and 1 Corinthians 12:3)

We believe the Bible is the completely trustworthy Word of God written in human language and thought forms but with God’s very Breath of Truth providing us with what we need for life today and life forever. (Romans 10:17, 2 Timothy 3:14-16, Hebrews 4:12)

We celebrate the Sacraments - Holy Baptism, Absolution, and Holy Communion - as the means by which Christ connects us to Himself and to others.   These Sacraments provide the gifts of forgiveness, faith, and eternal life through Jesus Christ. (Romans 6:3-11, Titus 3:5-6, and 1 Corinthians 10:16-17)

What is a Lutheran?

While there are a variety of ways one could answer this question, one very important answer is simply this, "A Lutheran is a person who believes, teaches and confesses the truths of God's Word as they are summarized and confessed in the Book of Concord." The Book of Concord contains the Lutheran confessions of faith.

Perhaps you have attended an ordination of a pastor and heard him promise that he will perform the duties of his office in accord with the Lutheran Confessions. When people are received into membership into a Lutheran congregation through confirmation they are asked if they confess the doctrine of the Evangelical Lutheran Church, as they have learned to know it from the Small Catechism, to be faithful and true.

What are the Ecumenical Creeds?

The three ecumenical creeds in the Book of Concord are the Apostles' Creed, the Nicene Creed and the Athanasian Creed. They are described as "ecumenical" [universal] because they are accepted by Christians worldwide as correct expressions of what God's Word teaches.

In the year 1530, the Lutherans were required to present their confession of faith before the emperor in Augsburg, Germany. Philip Melanchthon wrote the Augsburg Confession and it was read before the imperial court on June 30, 1530. One year later, the Lutherans presented their defense of the Augsburg Confession, which is what "apology" here means. It too was written by Philip Melanchthon. The largest document in the Book of Concord, its longest chapter, is devoted to the most important truth of the Christian faith: the doctrine of justification by grace alone, through faith alone, in Christ alone.

What are the Small and Large Catechisms?

Martin Luther realized early on how desperately ignorant the laity and clergy of his day were when it came to even the most basic truths of the Christian faith. Around 1530, he produced two small handbooks to help pastors and the heads of families teach the faith.

The Small Catechism and the Large Catechism are organized around six topics: the Ten Commandments, the Apostles' Creed, the Lord's Prayer, Holy Baptism, Confession, and the Sacrament of the Altar. So universally accepted were these magnificent doctrinal summaries by Luther, that they were included as part of the Book of Concord.

What are the Smalcald Articles and the Treatise on the Power and Primacy of the Pope?

In 1537, Martin Luther was asked to prepare a statement of Lutheran belief for use at a church council, if it was called. Luther's bold and vigorous confession of faith was later incorporated into the Book of Concord. It was presented to a group of Lutheran rulers meeting in the town of Smalcald. Philip Melanchthon was asked to expand on the subject of the Roman pope and did so in his treatise, which also was included in the Book of Concord.

What is the Formula of Concord?

What is the connection between the Bible and the Confessions?

We confess that, "The Word of God is and should remain the sole rule and norm of all doctrine" (FC SD, Rule and Norm, 9). What the Bible asserts, God asserts. What the Bible commands, God commands. The authority of the Scriptures is complete, certain and final. The Scriptures are accepted by the Lutheran Confessions as the actual Word of God. The Lutheran Confessions urge us to believe the Scriptures for "they will not lie to you" (LC, V, 76) and cannot be "false and deceitful" (FC SD, VII, 96). The Bible is God's "pure, infallible, and unalterable Word" (Preface to the BOC).

What is the main point of the Lutheran Confessions?

The Lutheran Reformation was not a "revolt," but rather began as a sincere expression of concern with the false and misleading teachings, which, unfortunately, even to this very day, obscure the glory and merit of Jesus Christ. What motivated Luther was a zealous concern about the Gospel of Jesus Christ. Here is how the Lutheran Confessions explain what the Gospel is all about:

Human beings have not kept the law of God but have transgressed it. Their corrupted human nature, thoughts, words, and deeds battle against the law. For this reason they are subject to God's wrath, to death and all temporal afflictions, and to the punishment of the fires of hell. As a result, the Gospel, in its strict sense, teaches what people should believe, namely, that they receive from God the forgiveness of sins; that is, that the Son of God, our Lord Christ, has taken upon Himself the curse of the law and borne it, atoned and paid for all our sins; that through Him alone we are restored to God's grace, obtain the forgiveness of sins through faith and are delivered from death and all the punishments of our sins and are saved eternally. . . . It is good news, joyous news, that God does not want to punish sin but to forgive it for Christ's sake (FC SD, V, 20).

What is a "confessional" Lutheran?

Therefore, it is our intent to give witness before God and all Christendom, among those who are alive today and those who will come after us, that the explanation here set forth regarding all the controversial articles of faith which we have addressed and explained--and no other explanation--is our teaching, faith, and confession. In it we shall appear before the judgment throne of Jesus Christ, by God's grace, with fearless hearts and thus give account of our faith, and we will neither secretly nor publicly speak or write anything contrary to it. Instead, on the strength of God's grace, we intend to abide by this confession (FC SD, XII, 40).

What is an "unconditional subscription" to the Confessions?

Confessional Lutheran pastors are required to "subscribe" unconditionally to the Lutheran Confessions because they are a pure exposition of the Word of God. This is the way our pastors, and every layman who confesses his belief in the Small Catechism, is able with great joy and without reservation or qualification to say what it is that he believes to be the truth of God's Word.

Dr. C. F. W. Walther, the Missouri Synod's first president, explained the meaning of an unconditional confessional subscription in words as clear and poignant today as they were then:

An unconditional subscription is the solemn declaration which the individual who wants to serve the church makes under oath that he accepts the doctrinal content of our Lutheran Confessions, because he recognizes the fact that they are in full agreement with Scripture and do not militate against Scripture in any point, whether the point be of major or minor importance; and that he therefore heartily believes in this divine truth and is determined to preach this doctrine.

So what is it to be a Lutheran?

Being a Lutheran is being a person who believes the truths of God's Word, the Holy Bible, as they are correctly explained and taught in the Book of Concord. To do so is to confess the Gospel of Jesus Christ. Genuine Lutherans, confessional Lutherans, dare to insist that "All doctrines should conform to the standards [the Lutheran Confessions] set forth above. Whatever is contrary to them should be rejected and condemned as opposed to the unanimous declaration of our faith" (FC Ep. RN, 6).

Such a statement may strike some as boastful. But it is not; rather, it is an expression of the Spirit-led confidence that moves us to speak of our faith before the world.

To be a confessional Lutheran is to be one who honors the Word of God. That word makes it clear that it is God's desire for His church to be in agreement about doctrine, and to be of one mind, living at peace with one another (1 Cor. 1:10; 2 Cor. 13:11). It is for that reason that we so treasure the precious confession of Christian truth that we have in the Book of Concord. For Confessional Lutherans, there is no other collection of documents, or statements or books that so clearly, accurately and comfortingly presents the teachings of God's Word and reveals the Biblical Gospel as does our Book of Concord.

Hand-in-hand with our commitment to pure teaching and confession of the faith, is, and always must be, our equally strong commitment to reaching out boldly with the Gospel and speaking God's truth to the world. That is what "confession" of the faith is all about, in the final analysis. Indeed, "It is written: I believed; therefore I have spoken.' With that same spirit of faith we also believe and therefore speak" (2 Cor. 4:13). This is what it means to be a Lutheran.

Robert Preus, Getting into the Theology of Concord: A Study of the Book of Concord (St. Louis: Concordia Publishing House, 1977).

David Scaer, Getting into the Story of Concord: A History of the Book of Concord (St. Louis, Concordia Publishing House, 1977).